By Marlyn Hoilette, RN. With millions of Floridians uninsured, the state ranks a lowly 46 out of 50 for the rate of residents who have health care coverage.

With millions of Floridians uninsured, the state ranks a lowly 46 out of 50 for the rate of residents who have health care coverage.

As a registered nurse, I see first-hand each day how this hurts children, seniors, and Floridians of every age.  Families put off going to the doctor or taking preventative care, or they try to stretch or pass up their medicine because they can’t afford it.

This is the result of decades of willful indifference from state lawmakers who have handed out billions of dollars in tax breaks and other favors for their corporate benefactors, while failing to provide for the most basic needs of Florida families.

Now, they’ve put a constitutional amendment – Amendment 5 — on the ballot that would lock us into their rigged system and make it nearly impossible to ever expand health programs such as Medicaid.

By requiring a super-majority vote of the legislature for approval of any future tax or fee increases, Amendment 5 is designed to block future lawmakers who would try to expand healthcare coverage and solve the crisis we’re in today.

Amendment 5 is a cynical attempt to make permanent the loopholes and tax credits that have allowed corporations to avoid paying their fair share, and that have left Florida and Floridians at the bottom of the nation in terms of health coverage.

The scheme behind Amendment 5 would mean that tax breaks for rich the and powerful stay in place forever, and everyday Floridians never get the money we need from the expansion of Medicaid, no matter if Andrew Gillum is voted in as Governor.  It’s a deceptive plan to subvert the will and critical needs of the people.

More information about Amendment 5 and its effects on health care can be found on the Florida Policy Institute’s website, factsonfive.org. 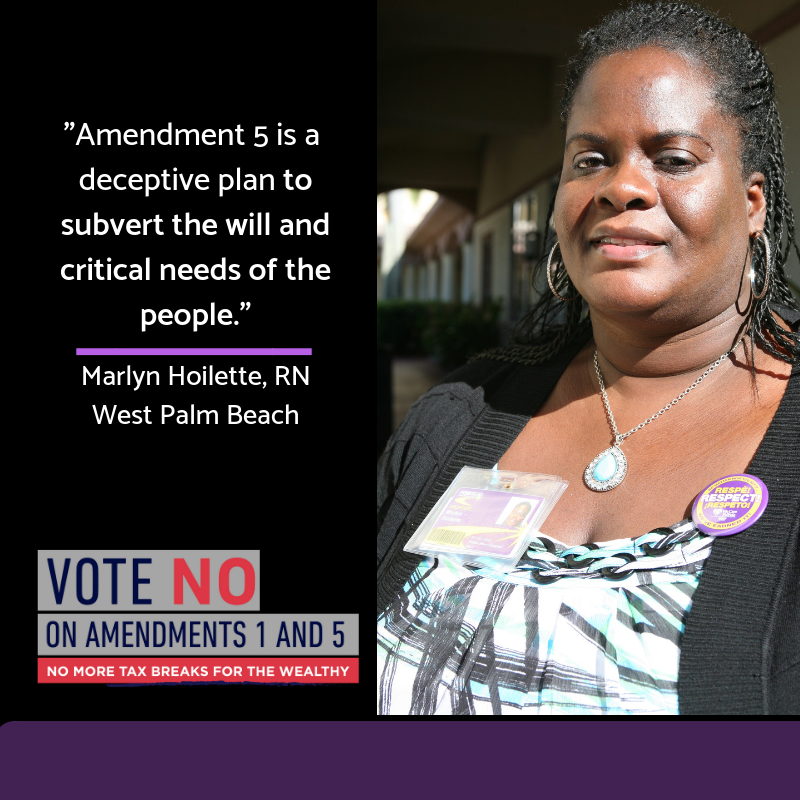 There are 2.54 million residents in Florida (12.5 percent) who are uninsured.  Most states, even others in the South such as Virginia, Arkansas and Louisiana, have expanded Medicaid to cover more of their neighbors, co-workers and hard-working families.

The partisan extremists in Tallahassee don’t care.  Their lobbyists have crafted Amendment 5.  This puts our future at even greater risk by giving future politicians more incentive to cut healthcare funding during bad economic times.

More than 4 million Floridians rely on Medicaid to cover critical health care services. Half of the recipients are children, and the remainder are primarily people with disabilities, the elderly and pregnant woman. Yet the Florida Legislature consistently targets Medicaid for cuts, and if lawmakers can’t raise revenue by a simple majority following an economic downturn, those cuts are likely to deepen.  Coverage for community-based and home services, which Florida covers through “optional” Medicaid waiver programs, are at risk of being eliminated or rolled back if state lawmakers are forced to make cuts.

So it’s critical to vote NO on Amendment 5, as well as electing true leaders who will serve the freedoms and needs of everyday Floridians.

Marlyn Hoilette RN is a registered nurse in West Palm Beach and is a member of 1199SEIU United Healthcare Workers East, the largest healthcare union in Florida.  The organization represents more than 25,000 active and retired nurses and other healthcare personnel throughout the state.