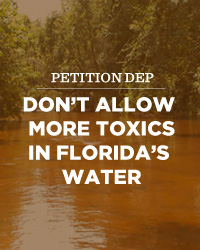 Who would want more dangerous, cancer causing chemical compounds in Florida’s water? It would seem Gov. Rick Scott’s Department of Environmental Protection (DEP) does. At the behest of polluters, DEP is looking to increase the amount of toxic chemicals in our rivers, lakes and springs.

Sign the petition to DEP: no increases in toxic chemicals in Florida’s water.

We’ll deliver your petitions to DEP’s Water Quality Standards Program, which is collecting public comments and developing these new standards.

The federal Clean Water Act requires states update their water quality standards regularly, but Florida hasn’t done so since the 1990s. While DEP is proposing to expand the number of chemicals it will regulate, most of these standards would be worse than the Environmental Protection Agency’s (EPA) recommended standards1.

One of the most potentially damaging changes is DEP’s proposal to allow three times the current allowable level of benzene in our waterways. Benzene is a well-known cancer causing chemical and a common byproduct of oil and gas production. Benzene’s obvious connection to fracking in particular should raise red flags for every Floridian2.

What’s also problematic is which chemicals DEP is choosing not to regulate. This includes dioxin, a byproduct of pulp and paper production, that according to the EPA is “highly toxic and can cause cancer, reproductive and developmental problems, damage to the immune system, and can interfere with hormones.”

Once again, Gov. Scott’s DEP is choosing sides, and it’s not the public’s or the environment’s.

Please share this far and wide so we can get as many Floridians pushing back against this dangerous proposal as possible. Thanks for all you do to protect the Florida we love.

2“Florida Proposes Tripling Amount Of Benzene That Can Be Polluted Into State Waters.” ThinkProgress, 5/16/16.