Tell Rubio he has no right 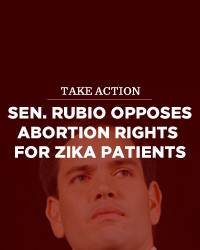 Sen. Marco Rubio has stated that a pregnant woman infected with Zika shouldn’t have the right to an abortion, even if doctors confirm that the child would be born with a severe brain defect (microcephaly).

A pregnant woman facing a Zika diagnosis needs compassion, support, and medical options. What she doesn’t need is politicians judging her, making decisions for her and using government to force her to bring her pregnancy to term.

There are now more than 3,800 cases of Zika in the United States and Florida is on the front lines. According to the Centers for Disease Control and Prevention, there are now more than 1,500 pregnant women in the United States and territories who have tested positive for the Zika virus. This includes 103 pregnant women in Florida.

Microcephaly can usually only be diagnosed later during pregnancy – a time when abortion is more expensive and difficult to access. Florida prohibits abortion after 24 weeks, yet a Harvard poll found a majority of Americans believe women should have access to abortion after 24 weeks if she has Zika and has been told by a health professional there is a serious possibility her baby will be born with microcephaly.

Rubio and Florida’s other anti-abortion politicians are out of sync with the American public, who believe that women facing a Zika diagnosis should have access to all options – including abortion.

The experience of having an abortion should always be safe, legal, and respectful of a woman’s decision. A woman who has decided to have an abortion – whatever her reasons – deserves our support.

Join us in sending a message to Sen. Rubio that no matter what his personal opinion of abortion is, it is not his place to support laws that dictate family planning decisions or force women to make decisions that should made by herself, her faith, her family, and her doctor.

For too long, Florida policymakers have enacted obstacle after obstacle to prevent women from exercising their reproductive rights. Whether it’s arbitrarily contrived waiting periods, burdensome requirements on abortion clinics, patients and their doctors, or efforts to defund organizations such as Planned Parenthood that provide abortion care, enough is enough.

These restrictions are medically unnecessary and designed only to restrict access to abortion care and shame women. Please sign our letter today.