In 2011, then-Governor Rick Scott and his allies in the state legislature gutted Florida’s Unemployment Insurance system. Thanks to their actions, Florida has some of the weakest unemployment benefits and strictest eligibility rules in the nation.

“It’s a sh– sandwich, and it was designed that way by (then Gov. Rick) Scott.”
– Unnamed advisor to Gov. Ron DeSantis, quoted in Politico 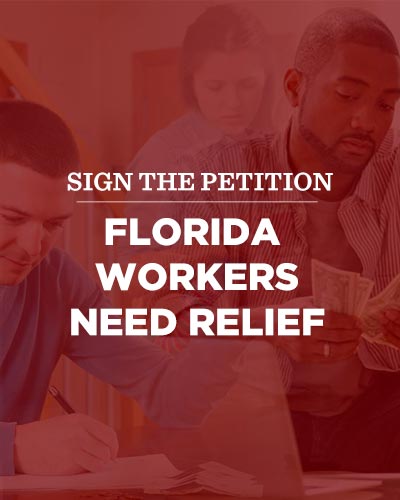 In 2011, then-Governor Rick Scott and his allies in the state legislature gutted Florida’s Unemployment Insurance system. Thanks to their actions, Florida has some of the weakest unemployment benefits and strictest eligibility rules in the nation.

It was politics over people at its worst. Scott wanted low unemployment numbers, and if you couldn’t file for unemployment then Scott’s unemployment numbers remained artificially low. The travesty is many of his GOP colleagues went along with the scheme and Gov. DeSantis, in the 14 months in office before this health and economic crisis slammed Florida, did nothing to fix the problem despite numerous audits and reports flagging the broken system.

Please take a moment to lend your voice in support of Florida’s workers and their families by signing the “Florida Workers Need Relief” now petition.

The coronavirus crisis has crippled Florida’s tourism and service-based economy, forcing a record number of Floridians to file for unemployment – but the state is, by design, ill-prepared to help out of work Floridians dealing with our state’s infuriating unemployment system.

The requirements for receiving benefits are ridiculous. The system barely works. The website keeps crashing. Calls are going unanswered. And for those lucky enough to navigate through this nightmare, the benefits they receive ($275 max per week) are among the lowest in the country. Gov. Ron DeSantis must fix this mess.

Add your voice to the chorus demanding Gov. DeSantis stand up for hardworking Floridians who need our help.

Progress Florida is joining the Florida AFL-CIO in calling on DeSantis to address this debacle by fixing our unemployment insurance system. DeSantis has the power to improve benefits and make them more accessible to unemployed Floridians who desperately need them during this unprecedented health and financial crisis.

Last week, DeSantis finally promised to improve the website, lift some (but not all) of the draconian work requirements, and process claims more quickly. But that isn’t nearly enough. The state already faces a backlog of more than a half million unemployment claims and that number will likely increase as layoffs mount and the online system increases capacity. As a result, workers will still have to wait weeks before seeing a dime in financial support.

Hardworking Floridians trying to get back on their feet deserve an unemployment system that works.

We’re calling for a number of immediate, critically needed reforms to this system. Among them are waiving all burdensome work-search, availability, work registration requirements, and permanently removing the one-week waiting period. The weekly benefit cap of $275 must be increased, as well as the number of weeks for eligibility.

Florida workers need relief: now more than ever. It’s time for Gov. DeSantis to remove all of the ridiculous obstacles preventing unemployed Floridians from getting support. These changes are desperately needed as more and more Floridians find themselves out of work and faced with a program that provides little relief – even if a worker’s claim is accepted.