Stop this assault on marine life 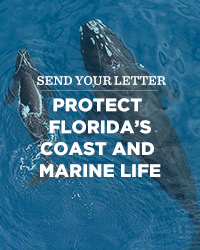 As reported by The Florida Phoenix, on February 20th attorneys general from ten states along the Atlantic Seaboard joined environmental groups in a lawsuit against the Trump Administration for violating the Marine Mammal Protection Act, the Endangered Species Act, and the National Environmental Policy Act – but Florida is conspicuously absent from the list of states represented in the lawsuit.

Unlike her predecessor and champion for polluters Pam Bondi, new Florida Attorney General Ashley Moody is at least considering having Florida join the other ten states in this lawsuit, and we need grassroots people power to make sure she does.

Offshore seismic tests shoot compressed air blasts at the ocean floor, revealing what lies beneath the surface. The blasts, emitted every 10 seconds for several months at volumes rivaling jet engines, injure and kill sea life, including dolphins, whales.and sea turtles that rely on sound for navigation, mating and feeding.

Trump’s National Marine Fisheries Service reportedly allowed one oil exploration company to harm more than 50,000 dolphins and another company to harm 20,000 more. The federal government estimates blasting will cause more than 373,000 instances of harm to marine mammals, according to Maryland Attorney General Brian E. Frosh, who is among the 10 state attorneys general along the Atlantic Coast which has sued to stop the blasting.

Only about 400 critically endangered North American right whales exist, and their only known breeding ground is off Florida’s Atlantic Coast.

Opening the Atlantic to seismic testing and drilling would harm marine life, jeopardize our coastal businesses, tourism, and national security. Worse yet, it would open the door to even greater risks from offshore oil and gas drilling down the road. Another disaster like the 2010 BP Gulf oil spill would devastate Florida’s marine life and ruin an economy that’s inextricably linked to the health of our coastal waters.

Millions of Florida jobs and businesses depend on a clean coastal environment and healthy ocean. Thanks for helping to convince Attorney General Moody to put the needs of Floridians, wildlife, and preservation of our oceans above Big Oil’s profits.