Sen. Nelson deserves our thanks

We get it: it’s easy to be cynical about politics and government these days. That’s why when one of our elected officials is fighting the good fight, often thanklessly, we want to lift that person up. 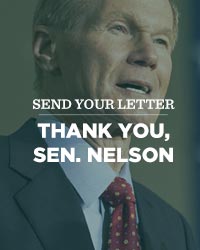 We get it: it’s easy to be cynical about politics and government these days. Every time you turn around there’s a new scandal erupting from the Trump Administration or a terrible bill working its way through Congress or the Florida Legislature. It can be exhausting.

That’s why when one of our elected officials is fighting the good fight, often thanklessly, we want to lift that person up. Today we’re talking about Sen. Bill Nelson.

Send a thank you letter to Sen. Nelson today for fighting the good fight on behalf of everyday Floridians.

Sen. Nelson isn’t constantly looking for the limelight and often works behind the scenes to get things done. That hasn’t diminished his dedication to Florida or his effectiveness as a legislator. Since President Trump took office, Sen. Nelson:

He’s also stood with victims of the Pulse shooting, introduced legislation to cut student loan rates, called out climate change denial by the Trump and Scott administrations, and fought the dangerous and reckless plan to privatize our nation’s air traffic control system. Sen. Nelson is doing good work, and in a cynical political world seemingly fueled only by anger, frustration, and outrage, he deserves our thanks.

Thank Sen. Nelson for the work he’s doing by sending him a letter today.

Sen. Nelson isn’t perfect, and there may be areas where we disagree, but a perfect politician doesn’t exist. We do know that Sen. Nelson is approaching the challenges Florida and our nation face with a desire to do what’s right, not necessarily what’s politically expedient. That counts for a lot, particularly in the era of Trump.

Thanks for taking a minute today to say “thanks.” We do a lot to hold those who vote against progress accountable. We should also lift up and thank those who champion progress.