Despite the urgent need to fill a vacancy in the Southern District of Florida, Sen. Marco Rubio is blocking the nomination of Mary Barzee-Flores for no reason other than politics. 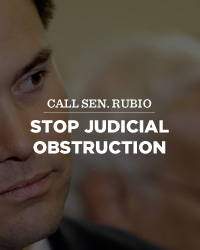 More than three months ago President Obama nominated Mary Barzee-Flores, a former Miami judge with an illustrious career, to serve as a federal judge in the Southern District of Florida. The vacancy has been open for more than a year, and is formally classified as a judicial emergency, meaning there simply aren’t enough judges to handle the large caseload.

Despite the urgent need to fill this vacancy, Sen. Marco Rubio is blocking her nomination for no reason other than politics. Meanwhile, as long as the position remains vacant, the understaffed judiciary builds a backlog of cases, delaying justice for Floridians.

Call Sen. Rubio today and tell him we need a vote on Mary Barzee-Flores.

The Senate Judiciary Committee won’t hold a confirmation hearing for Judge Barzee-Flores until it gets “blue slips” of approval from her two home-state senators. Sen. Bill Nelson has turned his in, but Rubio still hasn’t turned in his. The irony is that, after an exhaustive vetting from the bipartisan Florida Judicial Nominating Commission, Rubio joined with Nelson in recommending her to the President in the first place.

Given Judge Barzee-Flores’ distinguished qualifications, she should not be denied the opportunity to serve the citizens of South Florida because of political gamesmanship. There is simply no credible excuse for Sen. Rubio to delay Barzee-Flores’ nomination any further.

Take action: call Sen. Rubio and tell him to turn in his “blue slip” and help get Judge Barzee-Flores confirmed.

The need to fill this particular judicial vacancy is especially urgent because the Southern District court is already so overwhelmed with cases that the Judicial Conference of the United States has asked Congress to create three new judgeships in the Southern District. So even if Judge Barzee-Flores were confirmed today, they still won’t be able to meet the existing caseload.

Floridians deserve to have a fair and functioning judicial system and that requires a court system working at full capacity.