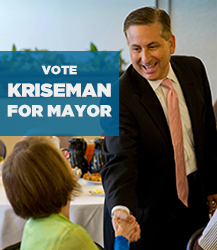 Election Day is Tuesday, November 7th, and it’s critical that you vote. When you do, I hope you will cast your ballot for Rick Kriseman. (If you’ve already voted by mail, great! Please share this message with friends and family who haven’t voted yet.)

Mayor Kriseman has been fighting for St. Pete residents’ best interests from City Hall to the State Capitol for well over a decade and he has done so with a firm grasp of the issues, a passion for improving our neighborhoods, and a bold leadership style demonstrating his willingness to tackle tough problems. Here are just a few of Mayor Kriseman’s accomplishments and forward thinking positions:

These are just some of the reasons Mayor Kriseman deserves your vote and another term as Mayor. Here’s what you need to know for this critically important election:

VOTE ON ELECTION DAY:  Polls are open 7am – 7pm on Election Day. Find your polling place by checking your Voter Information Card or click here to look up your polling location

WHAT TO BRING: A current and valid picture ID with a signature. Approved forms of valid IDs are listed here.

Anyone who knows me personally knows how much I love this city and care about its future. I spent twelve years in Tallahassee seeing how government can work for the people and how some politicians work against our interests. I couldn’t wait to get back to my hometown of St. Pete and help local leaders like Rick Kriseman win office and fight for the people not just the powerful.

Yours for a great St. Petersburg,