Sen. Marco Rubio (R-FL) is continuing to block a hearing for the Honorable Mary Barzee Flores, nearly eight months after she was nominated by President Obama on February 26, 2015 to the Southern District of Florida federal court.

Sen. Marco Rubio (R-FL) is continuing to block a hearing for the Honorable Mary Barzee Flores, nearly eight months after she was nominated by President Obama on February 26, 2015 to the Southern District of Florida federal court. Not only has this seat been declared a “judicial emergency”, but the Southern District court is facing such a massive backlog that Congress has been asked to create three additional new judgeships. 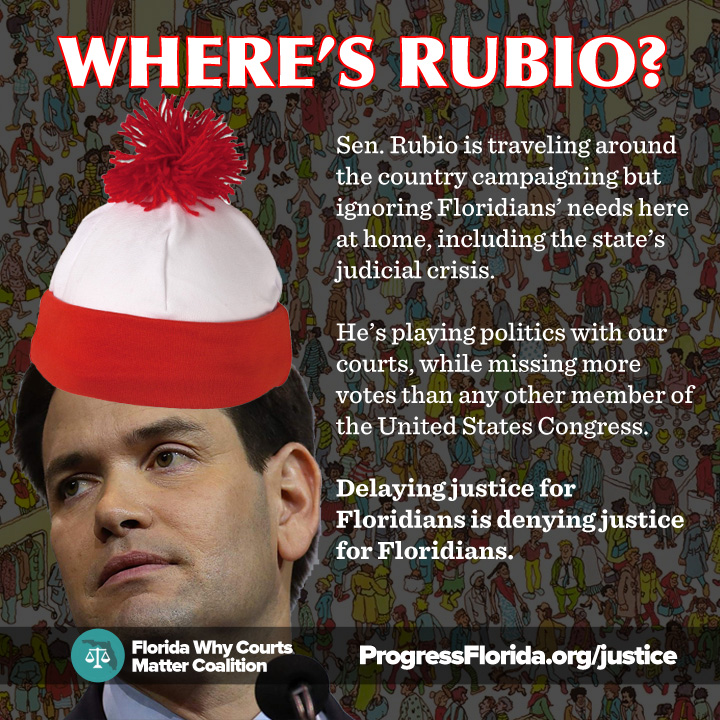 Sen. Rubio has been stumping for votes outside of Florida, but he has still not submitted his “blue slip” that is necessary by Senate rules to schedule a judiciary confirmation hearing for Flores. Sen. Bill Nelson (D-FL) submitted his blue slip for Flores the day of her nomination in February, which was jointly recommended by both Florida senators based on their bipartisan Florida Judicial Nominating Commission’s exhaustive vetting and September 5, 2014 recommendation that was praised by a Miami Herald Editorial.

Adding insult to injury for Floridians who need access to our overburdened federal courts, last week Senate Judiciary Committee Chairman Chuck Grassley (R-IA) announced a hearing for today that includes a nominee from September 15, 2015, nearly seven months after Barzee Flores. The Florida Why Courts Matter coalition is again demanding that Sen. Rubio quit playing political games with our courts and turn in his “blue slip” for Flores.

Florida Why Courts Matter coalition members have made numerous visits to Rubio’s offices and flooded him with phone calls, but have never gotten a straight answer as to why he is blocking Flores’ nomination. A Rubio spokesman told reporters that his office is waiting for an investigation, but that doesn’t explain why so many nominees have been vetted and confirmed while Flores languishes in limbo. As the Palm Beach Post editorialized last month, a background review “shouldn’t take six months, especially when Rubio recommended Flores’ nomination to begin with…Judicial candidates have a right to a timely up-or-down vote. The people have a right to a fair and functioning judiciary.”

A research memo released in August by organizations from across the country detailed the historic level of obstruction taking place in the U.S. Senate Judiciary Committee, led by Senator Chuck Grassley (R-Iowa). The memo demonstrates that under the obstructionist leadership of Senator Grassley, the Judiciary Committee is on pace to confirm the fewest number of judges since 1953. In Florida, Sen. Marco Rubio has developed a pattern of judicial obstruction forcing judicial emergencies to be declared by the federal court system. In addition to the judicial emergency in the Southern District, there are two vacancies in Central Florida that have been declared emergencies. As a result, many Floridians are unable to access the overburdened, understaffed courts in a timely manner.

The Florida Why Courts Matter coalition is focused on ensuring that the federal judiciary is representative of America’s diverse population and ending the judicial vacancy crisis so that every Floridian can have his or her day in court. For more information visit www.whycourtsmatter.org.