RicksRecession.com Shines Spotlight On Half Of Florida’s Counties Still In Recession

As Rick Scott enters his final legislative session, For Florida’s Future, a working families advocacy group, is launching RicksRecession.com, a new website highlighting the majority of counties still mired in a recession, and the nearly half of households in Florida who qualify as working poor. 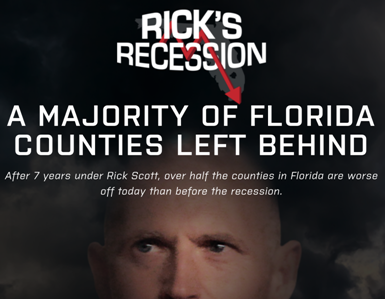 Tallahassee, Florida – As Rick Scott enters his final legislative session, For Florida’s Future, a working families advocacy group, is launching RicksRecession.com, a new website highlighting the majority of counties still mired in a recession, and the nearly half of households in Florida who qualify as working poor. For Florida’s Future will be backing the website launch with a digital ad buy across Facebook and Twitter.

Rick Scott’s claims that Florida’s economy has “completely” turned around is deeply out of touch with reality for most Florida families. Despite the official end of the recession, and a recovery that was underway well over a year before Scott took office, Florida is still struggling to recover behind other states and the rest of the country under Scott’s direction seven years after he took office. The fact is a majority of Florida’s counties, especially those in rural areas, are actually worse off today than they were before the recession hit. Nearly half of Florida households (45 percent) qualify as working poor and struggle to afford even basic necessities like transportation, prescriptions and housing despite being employed. For those struggling Floridians who haven’t given up looking for work altogether under Scott, a combination of poverty-level wages, rising cost of living, and lack of higher-paying jobs has blocked many from regaining their pre-recession stability. What recovery there has been in Florida, like most things on Rick Scott’s watch, has been unequal, disproportionately benefitting the wealthy and corporations.

Meanwhile, Rick Scott has spent his time and state resources as governor slashing and underfunding public education, refusing to expand Medicaid for as many as 1 million Floridians, and setting up corporate slush fundsthat divert millions in taxpayer dollars to the same wealthy corporations who help fund Scott’s campaigns.

Statement from For Florida’s Future Communications Director, Blake Williams: “Not a single thing Scott has focused on – slashing funding for public schools, refusing to expand Medicaid for millions of low-income Floridians or giving taxpayer funding to corporations who donate to his campaigns – has helped everyday Floridians. To think that almost half of households qualify as working poor is galling. To think that over half of Florida’s counties are still living in a recession that should have ended years ago is unconscionable. If we’re going to dig our way out of Rick’s recession, the first thing we need to do is start prioritizing working and middle class families, something Scott clearly hasn’t done.”

Florida families have been left behind long enough. With his own party in control of Tallahassee, Scott has no one to blame but himself for the failed policies that have left over half the state mired in the recession. As Scott enters his final year in office, it’s time for him to face facts on what most of Florida has actually been experiencing throughout his almost eight years in office, start focusing on policies that help working families, and put an end to Rick’s Recession.

BACKGROUND: Rick’s Recession Has Left Half the State Behind