ST. PETERSBURG – Today, Progress Florida released a video highlighting the need for an independent investigation into Pam Bondi’s reported solicitation of a donation from Donald Trump and Bondi’s subsequent decision not to stand up for Floridians who reported to the attorney general’s office that they had been ripped off by Trump University. The video, titled “Something Stinks”, is being released following several appearances by Bondi at Trump campaign rallies throughout Florida in recent weeks, and ahead of another scheduled Trump rally in Tampa today where Bondi may also appear.

The video may be viewed here or by clicking the graphic below: 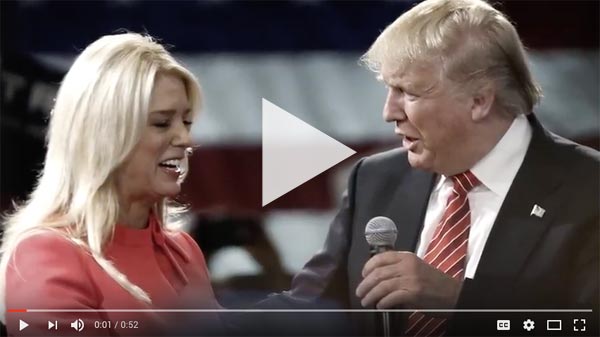 “Pam Bondi has shown a disturbing pattern of siding with powerful lobbyists and corporate interests over the Florida citizens she is sworn to protect,” said Progress Florida’s Executive Director Mark Ferrulo. “The timing of the Trump donation and Bondi’s decision to let Trump University off the hook raises the question of whether the state’s highest legal office is willing to barter away justice to the highest bidder. Floridians are demanding and deserve answers.”

Editorial boards across the state including the Orlando Sentinel, Palm Beach Post, Miami Herald, South Florida Sun Sentinel, Gainesville Sun and others have called for a probe. So has the nonprofit ethics watchdog group Citizens for Responsibility and Ethics in Washington (CREW), and an attorney has also filed complaints with the state and U.S. Attorney General. This past week, a prominent Republican lobbyist added his voice to the growing chorus calling for a federal investigation.

To get a high-resolution version of the “Something Stinks” Bondi-Trump video email mark@progressflorida.org or call 727-289-2612

To arrange an interview please use the contact information above.