ORLANDO – Today, a wounded Lady Justice joined members of the Florida Why Courts Matter Coalition for a visit to Sen. Marco Rubio’s Orlando office. The visit was intended to highlight Rubio’s political obstruction and inaction when it comes to filling emergency judicial vacancies on the federal bench in Florida.

“Florida is facing a judicial crisis with three court vacancies being declared ‘emergencies’, yet Sen. Rubio is playing politics by blocking President Obama’s nominees to the bench,” said Salandra Benton of the Florida Coalition on Black Civic Participation. “As a result, many Floridians are unable to access the overburdened, understaffed courts in a timely manner.” 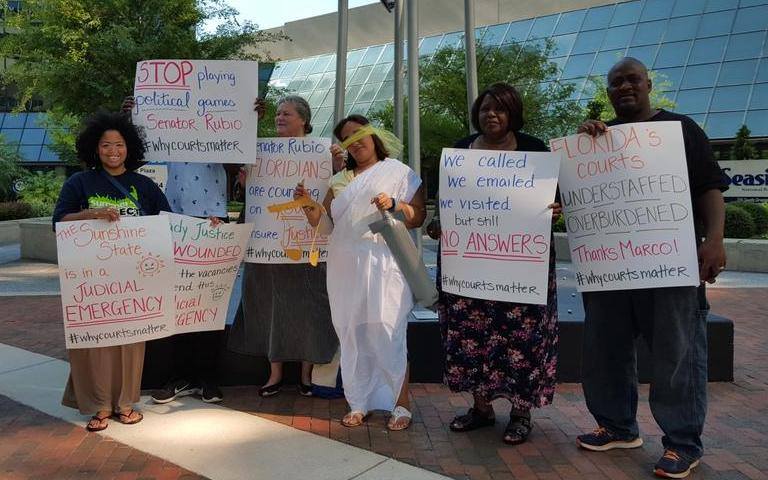 A research memo released earlier this month by organizations from across the country detailed the historic level of obstruction taking place in the U.S. Senate Judiciary Committee, led by Senator Chuck Grassley (R-Iowa). The memo demonstrates that under the obstructionist leadership of Senator Grassley, the Judiciary Committee is on pace to confirm the fewest number of judges since 1953. In Florida, Sen. Marco Rubio has developed a pattern of judicial obstruction forcing judicial emergencies to be declared by the federal court system due to open judgeships delaying justice for Floridians.

The Florida Why Courts Matter coalition is focused on ensuring that the federal judiciary is representative of America’s diverse population and ending the judicial vacancy crisis so that every American can have his or her day in court. For more information visit www.whycourtsmatter.org.