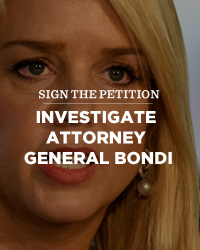 In the fall of 2013, Florida Attorney General Pam Bondi personally solicited a major campaign contribution from Donald Trump for her reelection campaign. Bondi’s office subsequently dropped a potential case against Trump University despite numerous complaints from Floridians. Bondi’s political committee received a $25,000 check four days after the case was dropped.1

Unfortunately, this latest episode of “pay to look away” is not Bondi’s first. The New York Times analyzed the cozy relationships between state attorneys general and special interests in a major investigative piece in October 2014.2 The close relationship between Attorney General Bondi and law firm Dickstein Shapiro was a key focus of their investigation. On several occasions, it appears Dickstein Shapiro convinced Bondi’s office to drop cases against their clients while making significant contributions to the Republican Attorneys General Association, the Republican Party of Florida, and Bondi’s political committee. Some of these alleged “pay to look away” cases included:

The Florida Ethics Commission cleared the now defunct Dickstein Shapiro law firm in April of violating the state’s lobbying laws. However, Florida law in this area is still murky at best, with one attorney for the ethics commission describing it as “a delicate area.”3 Regardless, the latest revelations about Trump University have once again demonstrated that Bondi is making case decisions based on money and not the merits.

Sign the petition and call for a federal investigation today.

The attorney general is Florida’s chief legal officer and Pam Bondi’s clear pattern of “pay to look away” is destructive to our state’s ability to enforce the law and protect everyday Floridians from powerful interests.