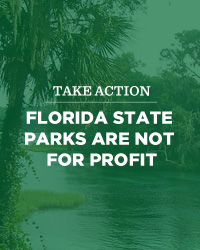 Florida’s state parks are a public treasure, yet Gov. Scott and his hand-picked Department of Environmental Protection (DEP) Secretary see them as little more than profit centers. That’s why they’re considering allowing hunting in all 161 state parks in addition to timber operations, cattle grazing, and more1.

Like Gov. Scott’s previous proposals to make a quick buck off of our state parks – including one thankfully short-lived idea to build golf courses in them2 – the proposal to allow hunting in state parks is already meeting strong resistance. Even members of Scott’s own party are dumbfounded. Sen. Jack Latvala (R-Clearwater) recently called DEP’s hunting proposal “a disaster waiting to happen.” Regarding Honeymoon Island State Park off the coast of Dunedin in Pinellas County, Sen. Latvala noted, “Within rifle range of the park are a condominium complex for retirees, boaters and beachgoers…Tourists do not visit beaches in Florida to go hunting.3”

Rick Scott and his DEP Secretary say that state parks should completely pay for themselves. That’s utter nonsense. We all pay taxes in part to pay for public places so we can enjoy their natural beauty and recreational opportunities. Our state parks also exist to preserve our history and protect open space, waterways, and wildlife for future generations. State parks, like public roads, public safety, and neighborhood schools do not exist for profit – period.

Urge the Florida Legislature to reject Gov. Scott’s latest cynical scheme that would manipulate our public parks for private gain.

These attacks on Florida’s state parks are just the latest front in Gov. Scott’s War on Wildlife and our environment. From fracking to weakening protections for panthers to the ill-conceived hunt on Florida black bears, we’re fighting back by educating fellow Floridians about what’s at stake and holding our elected officials accountable.