Nothing’s safe when this legislature’s in session

It’s all on the chopping block: local protections for our land and water, local rules against wage theft, local ordinances protecting LGBT rights, and more. Take action against the legislature’s massive power grab and urge your state legislators to vote no on HB 17. 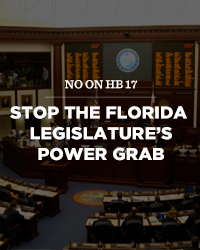 It’s all on the chopping block: local protections for our land and water, local rules against wage theft, local ordinances protecting LGBT rights, and more. Republican leaders in the legislature are taking aim at cities and counties that go above and beyond weak or nonexistent state laws in order to protect their communities from pollution, fraud, discrimination, and more.

Sign our letter to the Florida Legislature today and say you oppose HB 17, which prevents local governments from protecting their communities.

HB 17 is nothing less than a naked power grab by the legislature. Specifically, the bill takes away the power of local government to pass rules and regulations affecting businesses in their area. Under HB 17, only a law passed by the Florida Legislature could grant a city or county the ability to enact a rule affecting local businesses. Any existing local laws affecting businesses would expire in 2020.

As you can imagine, such an absurdly broad, one-size-fits-all bill would create a number of obvious problems. First, important local rules against things like wage theft and the overuse of water polluting fertilizers would be eliminated under HB 17. Hard fought local victories against LGBT discrimination would also be in danger. In addition, the legislation largely neuters the state constitution’s home rule provision, which gives local governments the authority to legislate on any matter not inconsistent with federal or state law. Finally, it would create a situation where the state legislature – in considering a blizzard of local bills – would essentially be doing the job of local elected officials, effectively micromanaging local government.

Take action against the legislature’s massive power grab. Urge our legislators to vote no on HB 17 and preserve local government’s ability to protect our environment, our safety, and our rights.

The Florida Legislature has previously “preempted” local governments who have attempted to improve the quality of life for its citizens. The legislature, doing the bidding of powerful special interests, has banned local earned sick time policies for workers and local bans on styrofoam use and pollution, despite overwhelming local support.  It’s a terrible practice that needs to stop. Local governments should always be allowed to go above and beyond state law when it comes to protecting the wellbeing of its citizens.

Thanks for taking a stand against the legislature’s latest power grab.