No underwater explosions, no killing dolphins 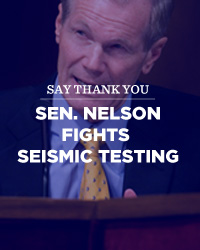 Five years ago, BP’s infamous rig Deepwater Horizon was spilling millions of gallons of crude oil into the Gulf, wreaking havoc on marine life, Florida’s economy, and our world famous beaches. The image of the rig engulfed in flames, beaches and birds smothered in oil filled our headlines for months and painted a clear picture that offshore drilling is anything but clean and safe.

Now, Big Oil is seeking to conduct seismic testing, the precursor to offshore oil drilling, off Florida’s eastern coast. Sen. Bill Nelson has introduced the Seismic Moratorium Act, which would halt seismic testing unless the National Oceanic and Atmospheric Administration deems such testing to be safe for sea life.

Thank Sen. Nelson for standing up to Big Oil and defending Florida’s coastline, marine life and our tourism economy from another devastating oil spill.

Loggerhead sea turtles migrating to their nesting beaches become disoriented and the sound of seismic air guns disrupt fish migration and spawning, resulting in the death of fish eggs and larvae. That can seriously damage the fragile Atlantic food web so critical to our coastal economies.

Sen. Nelson’s bill would go a long way towards banning oil drilling off Florida’s east coast. It’s a bold step in the right direction, especially as we work to transition to a clean energy economy.

Please join us in thanking Sen. Nelson for his work defending Florida’s coast and our economy by expressing your support for his bill.

Sen. Nelson will undoubtedly face an uphill battle against lobbyists and opponents in getting the bill passed, and will need all the support we can give him.

Thanks for all you do!