A new oil drilling operation has been proposed in the eastern Everglades, and we need your help to stop it. Oil drilling threatens not only Everglades restoration, but also imperiled wildlife and south Florida’s drinking water. 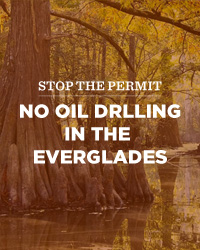 A new oil drilling operation has been proposed in the eastern Everglades, and we need your help to stop it. Oil drilling threatens not only Everglades restoration, but also imperiled wildlife and south Florida’s drinking water. Oil drilling is the slowest, most dangerous, and dirtiest way to meet our energy needs and to allow it in the Everglades of all places is insane.

Sign our petition to the Florida Department of Environmental Protection (DEP): “deny the proposal by Kanter Real Estate to allow exploratory oil drilling on the edge of the eastern Everglades.”

The application by Kanter Real Estate would allow for a five acre oil pad in southwest Broward County, with drilling to a depth of 11,800 feet, running around the clock for up to 80 days. While some oil drilling has taken place in south Florida since the 1940s, operations have been small and limited. The Kanter plan is part of a new hunt for oil in south Florida, and the plan’s approval could set a dangerous precedent and open the door to additional permits for both drilling and mining in the Everglades.

In areas potentially affected by the drilling, local opposition has been rising. Miramar, Pembroke Pines, Sunrise, and cities throughout Broward County have either passed or are considering resolutions opposing the permit by Kanter. The Broward County Commission may seek legal action to stop proposed drilling.

At this point, the best way to prevent further drilling in the Everglades is to get DEP to deny this permit.

Add your name to our petition to DEP urging them to deny proposed oil drilling in the eastern Everglades. We’ll deliver your petitions directly to DEP where they will be entered into the public record.

We’ve seen when enough Floridians raise their voice to protect our land and water, the public interest wins out. For three years, we’ve helped stop legislation that would allow dirty and dangerous fracking in our state. Two years ago, we helped persuade DEP to pull all the permits for Hughes Co., a Texas oil company caught illegally fracking in the western Everglades. Let’s do it again, and continue to protect the Florida we love.

PS: Every petition will be delivered directly to DEP and therefore every name counts. Please add yours today and stand up for the Everglades. Thanks!