Florida’s judicial system was once a model for the nation. Unfortunately, that’s no longer the case. That’s why Progress Florida, on behalf of the Florida Access to Justice Project, has officially submitted a series of proposed revisions to Florida’s Constitution. 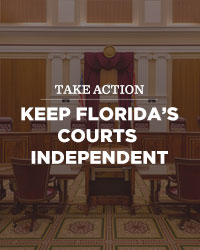 Florida’s judicial system was once a model for the nation. Unfortunately, that’s no longer the case.

That’s why Progress Florida, on behalf of the Florida Access to Justice Project, has officially submitted a series of proposed revisions to Florida’s Constitution. These suggested revisions deal with the Judicial Nominating Commissions (JNCs), who propose individuals to serve as state court judges, and are designed to help ensure a diverse state judiciary free from political and special interest influence.

The recommendations now sit before the powerful Constitution Revision Commission – learn more and take action here to encourage commissioners to support our proposal to get politics out of our courts.

Currently, Florida’s governor has too much control over who sits on regional JNCs and can appoint a majority of their membership.Our proposed constitutional amendment would change this, allowing the governor to appoint three members, but also three members would be appointed by the Florida Bar. These six members would then appoint three members from the area served by the JNC. We also propose that no more than five members of a JNC come from the same political party and have no “substantial personal or pecuniary” conflict of interest. Finally, our amendment requires that the governor and Florida Bar take diversity into account when making their selections, including ethnicity, race, disability, veteran status, gender, gender identity, and sexual orientation. They are also required to develop and publish surveys and data related to judicial diversity.

A recent report by the Florida Access to Justice Project demonstrated why this proposal is so important. It found that political influences have become a greater threat to the independence of the courts and its ability to act as a check and balance.

When the JNCs were established in the 1970s they were supposed to act independently as a check on executive power. But changes made to the JNCs under Jeb Bush politicized the process as candidates were increasingly subjected to a political litmus test. Gov. Rick Scott has rejected approximately 90 Florida Bar recommendations for JNCs, pushing them even closer to being a political arm of the Governor’s Office.

What’s more, Florida’s population is 22 percent Hispanic and 16 percent African-American. Yet among the state’s judiciary, fewer than nine percent of judges are Hispanic, and fewer than seven percent are African-American. Our proposed amendment will address this issue by ensuring that the race and gender composition of Florida’s courts more accurately reflects the communities they serve.

Email the CRC and encourage them to support our proposal to ensure a diverse state judiciary that is free from political and special interest influence.

Thanks for supporting these important reforms. If enacted, Floridians could be assured of a more diverse and fair system of justice that would limit partisan influence, create greater public accountability and help to further ensure the independence of our courts.