It’s been a tough week for Florida. Hurricane Irma has left devastation and tragedy in her wake from the Keys to Naples, Miami to Tampa Bay, Orlando to Jacksonville, and so many other communities. 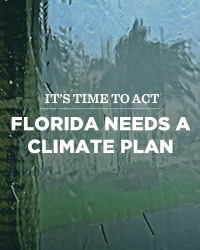 It’s been a tough week for Florida. Hurricane Irma has left devastation and tragedy in her wake from the Keys to Naples, Miami to Tampa Bay, Orlando to Jacksonville, and so many other communities. Despite flooded neighborhoods, destroyed homes, businesses upended and worst of all – loss of life, we’ve seen Floridians pull together and respond to their neighbors in need. It’s that spirit of community and determination to see a brighter future together that inspires this call to action.

Despite increasingly powerful hurricanes, regular flooding in coastal cities, loss of storm surge mitigating wetlands and coral reefs and repeated warnings from scientists, Florida does not have an active statewide plan for dealing with the impacts of climate change. It’s time to demand our state’s leaders act.

Sign our petition to the Florida Legislature: it’s time for a statewide plan to address the impacts of climate change.

It’s not a matter of if, but when, we’ll see more serious impacts from climate change in Florida. Hurricane Irma is only the most recent example. High tides regularly flood the streets of Miami and force coastal cities to spend millions to rehabilitate beaches lost to the ocean. Rising temperatures aid the spread of invasive species and accelerate the decline of native forests and rivers. Vulnerable populations such as poor and working class families suffer greatly, unable to move away from threatened areas whether a hurricane is approaching or not.

Climate change and its impacts continue to be ignored by legislative leadership. Gov. Scott has reportedly even declared the very phrase “climate change” off limits within his Department of Environmental Protection (DEP).

Hurricane Irma has once again forced this critical issue to the surface. It’s easy to become disenchanted or even cynical about our ability to do something about climate change. Regardless, one thing we know for sure is our state’s current or future leaders won’t change their tune unless we demand they take action and pressure them to put people over the profits of polluters.

Tell Florida’s legislative leaders it’s time to get serious and put together a statewide plan to address climate change.

We recognize Florida will need to tackle both ends of the climate change issue: addressing the expected impact while also working to curb the sources of climate change itself such as fossil fuel emissions. Together, we fought to pass Amendment 4 last year ensuring more solar power comes online. We continue to be engaged in the fight to ban fracking statewide.

We’re making progress on addressing climate change, even in Florida’s currently tough political environment. We’ll keep making progress with your help, by joining our voices together to demand action.