“I don’t think they care…it’s scary.”

This past week the Miami Herald and Tampa Bay Times published a shocking investigative news story on Rick Scott’s Department of Health and how they delayed for months notifying Floridians their well water had been contaminated with dangerous cancer-causing chemicals. 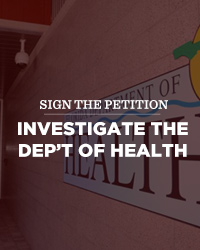 This past week the Miami Herald and Tampa Bay Times published a shocking investigative news story on Rick Scott’s Department of Health and how they delayed for months notifying Floridians their well water had been contaminated with dangerous cancer-causing chemicals. Reporters Samantha J. Gross and Elizabeth Koh detailed how the state delayed informing Ocala residents their water was unsafe, possibly in order to avoid bad publicity during Scott’s campaign for U.S. Senate.

Join us in demanding a full investigation of the state’s mishandling of this crisis, and whether health officials, including then Department of Health Secretary Celeste Philip, placed Floridians at risk to protect Scott and his U.S. Senate campaign.

“I don’t think they care. They don’t want nobody knowing anything, and it’s scary.” – Ocala resident Miriam Flores on the failure of Rick Scott’s Department of Health to protect her and her family from polluted well-water.

According to the Herald report, health officials were aware of dangerous groundwater contamination at Ocala’s Florida State Fire College from carcinogenic flame retardant chemicals in early September. But letters were not sent notifying nearby residents of the issue until November 5th – the day before the election.

The Herald further reported that Department of Health deputy secretary Les Beitsch was abruptly fired after he voiced concern about the department’s delay in notifying residents threatened by the polluted wells. Beitsch compared the cover-up to the Flint water crisis in Michigan, saying “This absolutely crossed a line. It’s disregarding possible human health consequences for whatever reason.” Beitsch indicated health officials downplayed the health risk to impacted residents and delayed notifying them in order to avoid bad publicity for then-Gov. Rick Scott, who was in a tight race for U.S. Senate against incumbent Bill Nelson.

Sign the petition urging Florida Attorney General Ashley Moody and federal agencies to fully investigate this crisis, whether Scott interfered, and the motive behind the suspicious firing of Department of Health deputy secretary Les Beitsch.

Since the Herald’s reporting, Congresswoman Debbie Wasserman-Schultz has urged the U.S. Environmental Protection Agency and U.S. Attorney General to conduct a “swift and thorough investigation”.

We’re also calling on newly sworn-in Florida Attorney General Ashley Moody to probe this matter. After the state failed to protect the residents of Flint from lead poisoned drinking water, Michigan’s Attorney General blew the case wide open and filed criminal charges against the parties responsible including Celeste Philip’s counterpart at Michigan’s Department of Health. It is incumbent on Moody to launch an investigation in order to ensure Florida’s Department of Health is working to protect the health of everyday Floridians, not powerful politicians like Governor, now U.S. Senator Rick Scott.

Please join us in demanding a full investigation of the facts surrounding this developing scandal.

Thank you for taking action to protect public health,