State Representative Eric Fresen (R-Miami) has thumbed his nose at Florida’s ethics laws and is now trying to avoid punishment for his actions. It’s critical that the Florida Commission on Ethics not let Fresen off the hook.

State Representative Eric Fresen (R-Miami) has thumbed his nose at Florida’s ethics laws and is now trying to avoid punishment for his actions. It’s critical that the Florida Commission on Ethics not let Fresen off the hook. Here’s the email we sent out to Miami-Dade supporters this morning.

“You make a mistake, you own up to it, you correct it – that’s one thing. To thumb your nose at the public trust is a whole different thing,” ~ Florida Commission on Ethics member Matthew Carlucci on Rep. Erik Fresen’s (R-Miami) refusal to pay a $1,500 fine for ethics law violations1

State Rep. Erik Fresen is trying to cut a deal with the state Ethics Commission to avoid the punishment which he deserves.

According to news reports, Fresen has admitted that from 2008-11 he didn’t properly disclose his net worth, assets and liabilities on financial disclosure forms as he was legally required to do. Fresen has also refused to pay a $1,500 fine levied by the Florida Commission on Ethics way back in 2004 for ethics law violations he committed in 2003.2

Just this week, when the Adam’s Street Project asked Fresen about the fine from 2004 and why he has refused to pay it, he refused to answer (see video).

Sign our petition to the Florida Commission on Ethics urging them to hold Miami Representative Fresen accountable for ethics law violations.  Commissioners will revisit this issue next month.  Make sure they hear from you today. 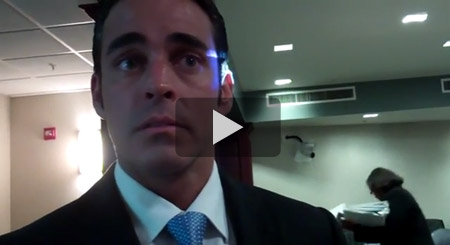 Three separate complaints have been filed against Fresen and once the Ethics Commission started investigating they found even more irregularities including a State Farm judgment of $2,521 that had gone unpaid.1  But what is even more troubling is that Fresen has still not paid a $1,500 fine levied by the Ethics Commission going all the way back to 2004.

“I can’t believe that a sitting House member has not paid his fine,” said Ethics Commission chairman Morgan Bentley.2

Fresen owes not only a fine but an explanation to his Miami-Dade constituents about why he considers himself, as a lawmaker, to be above the law.