High noon for fracking in Florida

Last week, the Florida House, at the behest of Big Oil lobbyists, advanced a pro-fracking bill that would strip cities and counties’ legal authority to ban this dirty, dangerous, and environmentally destructive drilling in their communities. 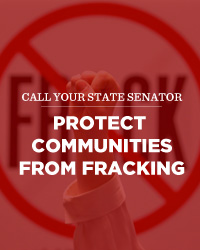 When it comes to fracking in Florida, it’s high noon in the Florida Senate.

Last week, the Florida House, at the behest of Big Oil lobbyists, advanced a pro-fracking bill that would strip cities and counties’ legal authority to ban this dirty, dangerous, and environmentally destructive drilling in their communities. The bill, SB 318, is up for a final committee vote in the Senate Appropriations Committee before it goes to the senate floor. Now is the time to pick up the phone and take action.

Please call your state senator now and them right now and tell them to vote NO on SB 318.

Important: You may hear some version of this from pro-fracking supporters in an attempt to confuse you: “Right now there’s no regulation on fracking in Florida. Would you rather have some regulation or no regulation? Would you rather have this bill or no bill?” Remember, cities and counties currently have the authority to ban fracking, and dozens have already done so. This bill would eliminate all of those existing bans, and prevent communities from banning fracking in the future. SB 318 has nothing to do with regulation and everything to do with trampling on the rights of local communities to protect their land and water.

Floridians have been rallying and organizing throughout the state against fracking. Politicians are increasingly seeing a political price to be paid in supporting an idea as nonsensical as fracking in Florida’s fragile geology.

Nonetheless, the only way we defeat fracking this year is with the voices of thousands of Floridians calling on their legislators to do the right thing and allow communities to protect their land and water by banning fracking.

Add your voice now. Call your senator today and urge them to vote NO on SB 318.

Be sure to share this email with Florida friends and family so we can get the word out about this terrible bill and build the grassroots momentum we need to let our legislators know we won’t tolerate fracking in our state.

Thanks for adding your voice at this critical time.