Gov. Rick Scott has shown time and time again that he thinks he’s above the law – and now he’s forcing us to pay for it.

“Even for someone who has amply shown contempt for open government, Rick Scott’s latest failure to play by the rules is outrageous.” – Miami Herald editorial, 8/10/15

“It’s easy to spend money — when it belongs to someone else. Just ask Gov. Rick Scott.” – Orlando Sentinel editorial, 8/11/15

Gov. Rick Scott has shown time and time again that he thinks he’s above the law – and now he’s forcing us to pay for it. 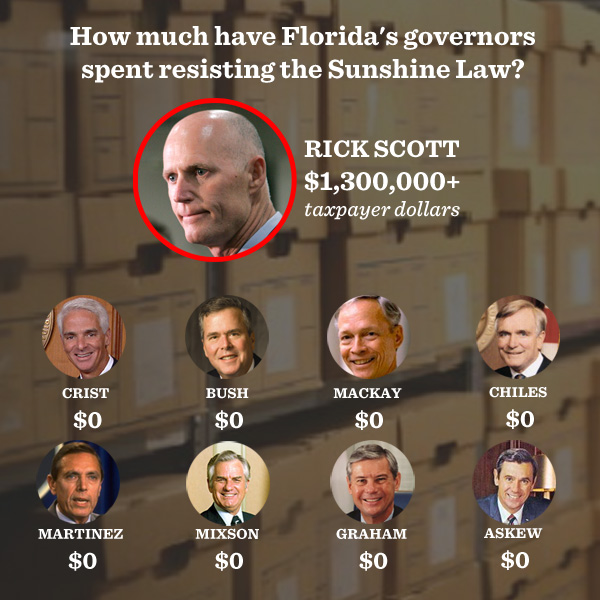 Gov. Scott has made the unprecedented move of sticking taxpayers with at least $1.3 million in legal fees over disputes in which he was alleged to have violated Florida’s Sunshine Laws. We think it’s outrageous that Florida taxpayers should have to pay Gov. Scott’s legal bills while he snubs his nose at open government and circumvents public records laws.

Gov. Scott has developed a pattern of conducting government in the shadows rather than the sunshine. The lawsuits that were recently settled both involved illegal communication within the governor’s office – attempts to get around public records laws.

The first case involved the Governor and cabinet’s secret, illegal firing of FDLE Commissioner Gerald Bailey. In the second case, Scott and his staff sought to avoid open records laws by using private email to conduct state business. Maybe if Gov. Scott had to pay his own legal bills, instead of taxpayers, he would show more respect for the constitution he has sworn to uphold.

As Barbara Petersen, president of the First Amendment Foundation said of Gov. Scott: “He’s playing fast and loose with our Constitution and we’re paying the cost, both literally and figuratively.”

Simply put, Gov. Scott’s use of taxpayer money to fight open government lawsuits is an affront to every Floridian. Haven’t we paid enough?

PS: Help us spread the word demanding Gov. Scott pay his own legal fees by sharing the above infographic with your friends and followers on Facebook or Twitter!