Unleashing a flood of guns onto college campuses won’t do anything to improve safety and only increases the risks faced by students, faculty, and others.

“When I applied to UCF, I wasn’t expecting to walk the halls and attend class wondering if the person next to me was trained to carry a firearm.” 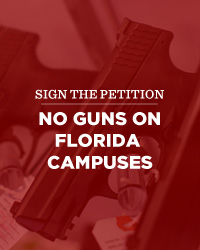 Two days ago Republicans in the Florida Legislature advanced a pair of bills through committee that would allow guns on our college campuses. This dangerous legislation needs to be stopped.

Sign the petition to the Florida Legislature: don’t approve SB 68 and HB 4001 that would allow guns on Florida college campuses.

As a graduate student at Florida State University, I share the exact concern that Adam Whitmer described to a legislative committee on Wednesday. Unleashing a flood of guns onto college campuses won’t do anything to improve safety and only increases the risks faced by students, faculty, and others.

Supporters of guns on campuses have insidiously used stories of campus rape and assault as a justification for this legislation. I’ve personally heard the stories of several students who are survivors and all have noted that if a firearm had been involved, their situation would likely have been fatal. Campus rape and assault is a serious problem, but bringing guns into the equation will only make matters worse.

It’s for this reason and many others why such a broad and ideologically diverse coalition of university presidents, law enforcement, faculty, and students are standing up against guns on campus legislation.

This legislation, despite being supported by the powerful and influential National Rifle Association (NRA) was defeated earlier this year after an outcry from Floridians throughout the state. It can happen again with your support.