When Florida voters overwhelmingly passed the Water and Land Conservation Amendment 1, they sent a loud and clear message to policy-makers – preserve and protect what remains of Florida’s amazing waterways and precious open spaces. 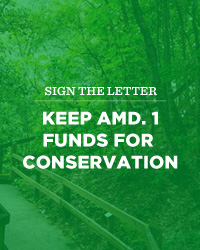 When Florida voters overwhelmingly passed the Water and Land Conservation Amendment 1, they sent a loud and clear message to policy-makers – preserve and protect what remains of Florida’s amazing waterways and precious open spaces. Unfortunately, that didn’t stop the Republican majority in the legislature last year from doing everything in its power to undermine implementation of Amendment 1. Now, adding insult to injury, two legislators in the majority have introduced HB 1075 and SB 1290 which would allow Amendment 1 dollars to be used for things like water pipes and pumps1.

Sign our letter to the Florida Legislature today telling them that further undermining Amendment 1 is unacceptable.

In 2014, an overwhelming 75% of Florida voters approved Amendment 1 requiring certain state funds to be used for conserving land and water resources. Amendment 1 was a response by voters to ever shrinking state resources being utilized to purchase sensitive lands for conservation, water protection, and species preservation.

In the 2015 session, legislators brazenly ignored Florida voters outright, diverting Amendment 1 funding to other areas of the state budget — a legal challenge is currently working its way through courts. We need to let our legislators know loud and clear that pumping and piping water is neither land conservation or springs and waterway protection.

Take action and tell the Florida Legislature to vote no on HB 1075/SB 1290 and keep Amendment 1 funds for protecting Florida’s land and water.

The fight to protect the Florida we love is a multifaceted effort: from protecting our existing state lands and parks, to banning fracking, and more. Thanks for all you do to preserve Florida for future generations.