Gov. Rick Scott’s Fish and Wildlife Commission (FWC) just completed their cruel and widely condemned Florida black bear hunt, and it was an unmitigated disaster. Unbelievably, despite this horrific debacle, the FWC is already planning the next black bear bloodbath. 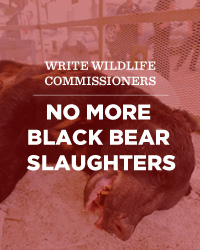 Gov. Rick Scott’s Fish and Wildlife Commission (FWC) just completed their cruel and widely condemned Florida black bear hunt, and it was an unmitigated disaster. They were forced to end the hunt early after the state’s quota of 320 bears was nearly met in just two days. In the eastern Panhandle nearly triple the state’s quota of bears for that region were killed.

These numbers don’t even account for the orphaned bear cubs that will be unable to survive without their mothers, or the injured bears left to die in the forest, or any illegally killed undersized bears that went unreported. Unbelievably, despite this horrific debacle, Gov. Scott’s Fish and Wildlife Commission is already planning the next black bear bloodbath.

Click here to email the Fish and Wildlife Commission and demand they call off future Florida black bear hunts.

State officials have claimed that the hunt was necessary to control the growing bear population, but that assertion is flimsy at best considering the state does not even have reliable population numbers for black bears. In fact just three years ago, Florida’s black bears were still a protected species. As the Sun Sentinel editorialized, “it was way too early to have this hunt. And it’s way too early to think about having another.”

Gov. Scott’s wildlife commission not only ignored science when conducting Florida’s bear hunt – they ignored the will of Floridians. Prior to the hunt, the FWC received about 40,000 comments and the overwhelming majority of 75% opposed the hunt.

Gov. Rick Scott and his administration have been dismantling Florida’s environmental and wildlife protections for too long. It’s time Floridians speak in an overwhelming and united voice and make clear that our state’s treasured wildlife including the iconic black bear must be protected for future generations.