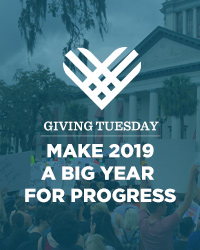 President Trump and his allies in Congress are reeling from multiple defeats at the hands of grassroots progressive power. Here in Florida, we’ve gained ground in some areas but faced tough setbacks elsewhere. Progressives face a number of challenges and exciting opportunities heading into next year, and we will need resources to keep organizing, fighting, and winning.

Make a $15 contribution or more today as part of #GivingTuesday and fuel the fight to win big progressive victories in 2019. Make it a monthly contribution if you can. We can’t afford not to fight back during this critical time.

There are so many big opportunities to fight back against the far right and win progress for everyday Floridians. Here are just a few we’re engaged in:

As you know, there’s so much more that’s possible next year if we fight hard and smart. We’re ready with your help to mobilize our tens of thousands of supporters in communities throughout Florida to fight back and win in 2019. Will you make a contribution right now to help make that happen?

Help ensure Florida progressives don’t miss out on the many opportunities to fight back and win progress in 2019. Make a $15 or more contribution this #GivingTuesday. Make it monthly if you can to keep us fighting throughout the year non-stop.

When you consider what we were able to help do in 2018, you can imagine what we can achieve in 2019. Together, we helped tens of thousands of Floridians register and vote, published a widely used ballot guide to the amendments that helped pass Amendment 4, launched the People First Report Card, protected reproductive freedom, and more.

We know with your help and support we’ll continue to build progressive power throughout Florida and move our state forward in 2019.