Contender for worst idea ever

Not since the Cross Florida Barge Canal project of 1960s has there been a more environmentally disastrous project conceived than the “Roads to Ruin” rural toll roads plan. 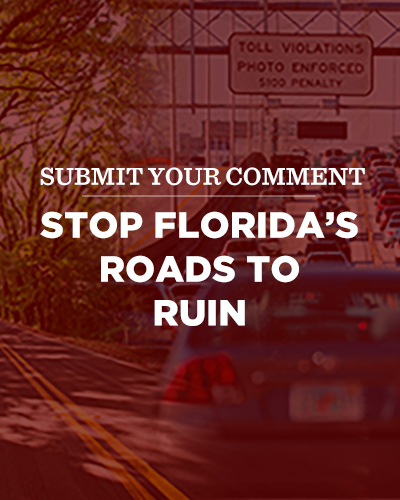 Not since the Cross Florida Barge Canal project of 1960s has there been a more environmentally disastrous project conceived than the “Roads to Ruin” rural toll roads plan. Public opposition eventually defeated the canal (though the harmful impacts linger to this day.) And fortunately, a similar outpouring of public opposition can still stop this new special interest driven environmental tragedy and taxpayer boondoggle.

Earlier this year, the legislature passed, and Gov. Ron DeSantis signed into law, a bill to fast-track three major new toll roads that will destroy large swaths Florida’s remaining rural lands, pollute waterways, increase global warming pollution and threaten endangered wildlife, including the iconic manatee and Florida panther. If completed, 330 miles of new toll roads would be built across south, central and north Florida. Construction of the “Roads to Ruin” will destroy more than 52,800 acres of farmland and wildlife habitat while at the same time promoting sprawling, unsustainable development.

Take a moment to speak out against this disastrous plan. Submit a public comment to the M-CORES Toll Road Task Force right now.

These new toll roads, formally known as M-CORES (Multi-use Corridors of Regional Economic Significance) will increase air and water pollution and destroy precious wetlands, springs and aquifer recharge areas. Animals like the endangered Florida panther and black bear rely on connected natural areas to survive. The three toll roads being planned will slice through some of the most precious remaining natural and agricultural areas in Florida, permanently severing connectivity within critical wildlife corridors.

With so many immediate and pressing social, economic and infrastructure priorities, our state legislative leadership and governor should be investing in ways to ensure a healthier environment and brighter future for all Floridians, rather than spending upwards of 20 billion dollars on these “Roads to Ruin” championed by big developers and the Asphalt Industrial Complex.

Take action today. Submit a public comment in opposition to the “Roads to Ruin.”

The plan for these destructive and unnecessary toll roads was rushed through the Florida Legislature with almost no discussion or debate and quietly signed into law by Gov. DeSantis despite enormous public demand for a veto. While supporters claim they were “well vetted,” these new toll roads were never even publicly discussed before spring 2019.

If we start to pave over Florida’s remaining natural areas, there’s no going back. These “Roads to Ruin” are a recipe for out of control urban sprawl that will further strain our state’s water resources, contribute to climate change, and wreak havoc on wildlife and wilderness. And who wanted this? Senate President Bill Galvano (R-Sarasota) and the trucking industry, road builders, developers and other powerful special interests who will make huge profits at the expense of rural communities, fragile natural resources and us, the taxpayers.

In my decades of fighting against attacks on what makes Florida such a special place to live and raise a family, this is truly one of the gravest threats we’ve ever faced. Thanks for fighting alongside us to stop these “Roads to Ruin.”

For a better Florida,