For more than 50 years, Floridians have used the citizen initiative process to pass popular policies when the leadership of the Florida Legislature refused to listen. Florida voters have approved citizen led changes to our state Constitution that legalized medical marijuana, restored voting rights, increased the state’s minimum wage and banned offshore oil drilling.

Now, after a decade spent making citizen initiatives more and more challenging to undertake, some leaders in the state legislature want to kill them for good and take power back from the people of Florida.

Floridians mobilize and gather petitions to get statewide initiatives on the ballot, which can cost millions of dollars. Introduced by Senator Ray Rodriguez (R- Estero), Senate Bill 1890 would dramatically limit fundraising efforts for citizen ballot initiatives, making it even more difficult, if not impossible, for these initiatives to ever get on the ballot.

Call your state Senator today and tell them to stand up for democracy in Florida by voting NO on SB 1890. 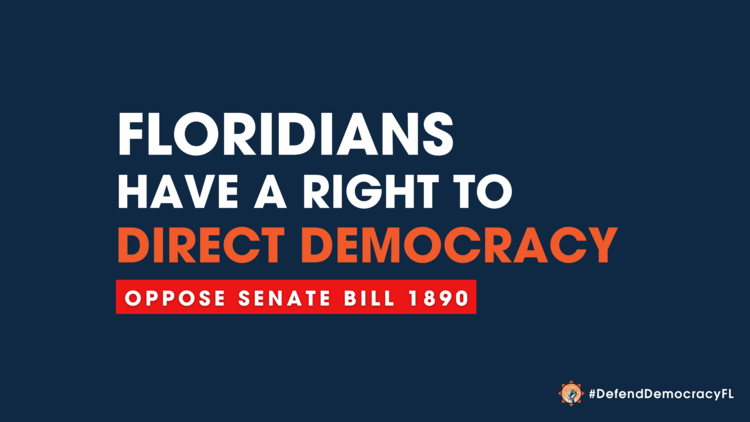 Our state constitution belongs to the people of Florida, not powerful corporate special interests and well-connected lobbyists in Tallahassee.

It’s important we protect the citizen initiative process in Florida as a direct democracy option for Floridians to go around the state legislature when powerful interests block widely popular policy changes. The forces behind SB 1890 are the same powerful special interests that currently control the legislative process with their army of lobbyists and deep bank accounts. They hate when the people bypass the legislative body they've "invested" in and largely control and go directly to the ballot with a proposed constitutional amendment.

Contact your state Senator today and urge them to vote NO on SB 1890.

Let’s make sure our state senators never forget that the Florida Constitution belongs to the people, not just the powerful. Thanks for standing up for democracy,