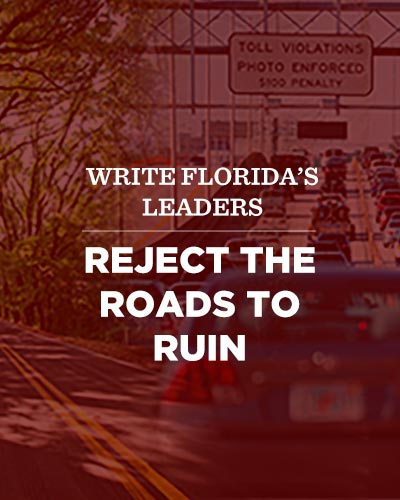 Over the past year, public pressure has been mounting against the $20 billion Toll Roads to Ruin project which, if built, would destroy large swaths of Florida’s remaining rural lands, pollute waterways, and decimate endangered species including the iconic Florida panther.

The last thing Florida needs is three massive new toll roads built in the least populated areas of the state, yet Gov. DeSantis and the deep-pocketed road building industry continue to push for it.

An overwhelming 93% of public comments during the recent toll road task force meetings opposed the roads. And, due to the COVID-19 pandemic, Florida’s budget is projected to be a whopping $2.7 billion dollars short. With a massive hole in our state budget, it’s more important than ever to urge state lawmakers to slam the brakes on these Roads to Ruin.

Urge the new Florida Speaker of the House and Senate President to nix the statute that requires construction of these Roads to Ruin.

The cost of these three new toll roads is staggering – up to $20 billion – and estimates for toll revenues are often grossly overestimated. Analyses conducted by Cornell Consulting and Florida TaxWatch concluded the toll roads are not financially feasible. Moreover, our state’s existing infrastructure is crumbling and ranked 40th nationwide in overall cost-effectiveness and condition. Florida taxpayers simply can’t afford the Roads to Ruin.

With so many immediate and pressing social, economic and infrastructure priorities, our state legislative leadership and governor should be investing in ways to ensure a healthier environment and brighter future for all Floridians, rather than spending billions of taxpayer dollars on these Roads to Ruin the public clearly does not want and cannot afford. New Senate President Wilton Simpson has indicated a willingness to review the Roads to Ruin in light of the state’s budget crunch, and we need to hold him to it.

Join Floridians across the state calling on legislative leaders to reject the Roads to Ruin boondoggle.

These roads wouldn’t just be a financial and economic disaster. Once we start to pave over Florida’s remaining natural areas, there’s no going back. These Roads to Ruin are a recipe for out of control urban sprawl that will further strain our state’s water resources, contribute to climate change, and wreak havoc on wildlife and wilderness.

For a brighter Florida future,