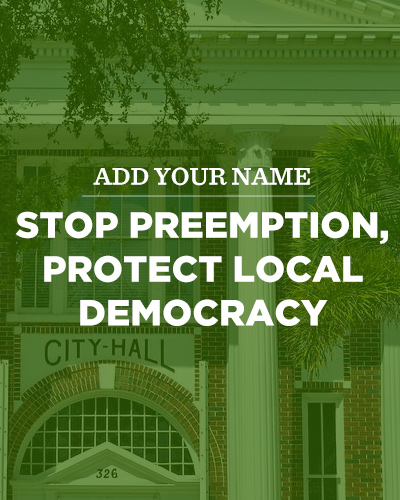 At almost every turn, the leadership of the Florida Legislature has undermined local communities by passing regressive laws overruling local government action. Why? Because corporate special interests told them to. These are known as “preemption” laws, and they come with major negative consequences for Floridians, our neighborhoods, our health, our environment, and our financial security.

Now the 2020 legislative session is underway and Republican lawmakers have filed at least 20 more bills attacking local government and local democracy. These bills don’t benefit the constituents these legislators were elected to serve – only the narrow special interests like corporate polluters whose lobbyists call the shots in the Capitol.

We’re calling on lawmakers to not only reject any further attacks on local democracy , but to support House Bill 6065 and Senate Bill 1520. These common sense proposals would undo corporate-driven preemption laws that currently prevent communities from enacting laws supporting working families.

Preemption efforts driven by special interests should not stand in the way of local innovation, community needs, and self-government. Thanks for telling state legislators to stop attacking local democracy, and to support HB 6065/SB 1520.