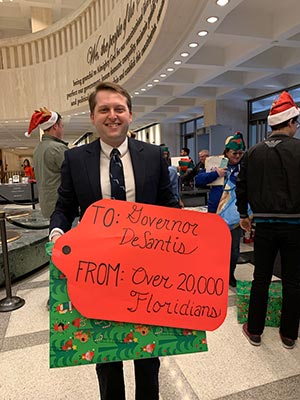 Today, I was proud to help deliver your petition along with nearly 20,000 others calling for a law banning fracking in Florida to the offices of Gov. DeSantis, Florida Senate President Galvano, and Florida House Speaker Oliva. It was our holiday gift to the governor and legislative leadership, complete with a chorus of anti-fracking carols!

Along with our allies in the Floridians Against Fracking Coalition, including ReThink Energy and Food and Water Watch, we held a press conference at the Florida Capitol calling on Gov. DeSantis and legislative leaders to enact a total ban on this dirty and dangerous practice that threatens our land, water, and public health.

You should be proud of the progress you've helped bring about in the fight to finally ban fracking statewide. We launched our first petition campaign opposing fracking in 2014, and over the last five years we've gone from a legislature that has tried to pass pro-fracking legislation to one where bills to ban fracking are now heard in committee. In 2020, it’s time to get this done.

Gov. DeSantis has seen the fast growing opposition to fracking, and has been trying to have it both ways on this issue. Earlier this year the governor signed an executive order calling on the Department of Environmental Protection to oppose fracking, yet failed to put the full force of his office behind a state law that would ban all fracking. This lack of real action combined with DEP’s recent actions allowing a Texas oil company to drill for oil in the Apalachicola River Basin is disgraceful.

Let’s be clear: the rhetoric of the DeSantis administration when it comes to protecting our water from drilling and fracking have been nothing but weasel words. With your help, we're not going let them get away with it, and the nearly 20,000 petitions delivered today are a reminder to our legislators and Gov. DeSantis that we’re paying attention, and that we demand a ban on all fracking. We will settle for nothing less when it comes to protecting the Florida we love.

Thanks again for taking action, and it was an honor representing your voice in the state capitol today.