A slow motion disaster in the Gulf 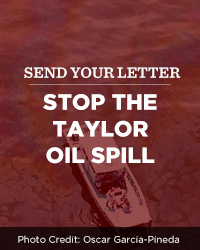 And you thought the 2010 BP oil spill disaster was awful.

An oil rig has been continuously leaking oil into the Gulf of Mexico for the past 14 years, one of the worst offshore disasters in U.S. history. Even more alarming, a new study estimates the rig is leaking 4,500 gallons of oil a day – over a thousand times more than the three or four gallons the owner, Taylor Energy Co., claimed.1

Taylor Energy has been fighting a federal order to stop the leak, so we’re joining our allies at Environmental Action and calling on the Environmental Protection Agency (EPA) to protect the Gulf and enforce the order.

Tell the EPA: Protect the Gulf. Make Taylor Energy clean up its mess.

In 2004, Hurricane Ivan sank a Taylor Energy oil platform off the coast of Louisiana. The pipes ruptured, and have been releasing oil and gas into the Gulf of Mexico ever since.2 Now researchers from the National Oceanic and Atmospheric Administration and Florida State University have found that 108 barrels of oil – 4,500 gallons – have been seeping into the Gulf each day.

We know how dangerous oil is to marine wildlife, but we don’t know the extent of damage from this leak. That’s because the government relied on Taylor Energy’s own assessment, which downplayed the potential harm to the Gulf. And while Taylor challenges the federal order to stop the leak, more and more oil is leaking into the ocean, threatening the lives of whales, dolphins, sea turtles and more.

We can't keep waiting, we need to tell the EPA to enforce the order and make Taylor Energy stop the leak. Take action now.

Offshore drilling is the slowest, dirtiest and most dangerous way to meet our energy needs. Dirty and dangerous offshore drilling harms marine life, and jeopardizes our coastal businesses, tourism and seafood industries. We’ll keep working to end our reliance on dangerous fossil fuels and offshore drilling in favor energy conservation, efficiency, and use of clean, safe, renewable energy sources.

The bottom line is we can’t let another oil spill disaster devastate Florida’s marine life and ruin an economy that’s inextricably linked to the health of our coastal waters.

Take action now to prevent the largest U.S. oil spill from continuing to harm the Gulf.

2Darryl Fears, "A 14-year-long oil spill in the Gulf of Mexico verges on becoming one of the worst in U.S. history," The Washington Post, October 21, 2018.