“Gov. DeSantis actually stood at a private school Friday in Orlando and said, ‘If the taxpayer is paying for education, it’s public education.’ That is absurd. It redefines the meaning of public education in Florida and the nation. It also flies in the face of the Florida Constitution.” – Tampa Bay Times editorial board 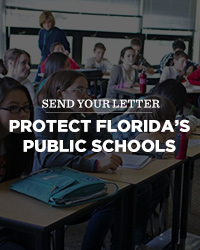 Gov. Ron DeSantis and Senate leaders are pushing a massive, unconstitutional private school voucher scheme that will siphon even more tax dollars away from Florida’s cash-strapped public schools to largely unaccountable and often scandal-plagued private school companies. It’s like Rick Scott’s voucher scheme on steroids, and we must stop it.

Don’t waste a minute – tell your state Senator to vote against SPB 7070, an expansion of private school vouchers, and to oppose any further taxpayer handouts to unaccountable private schools.

Florida’s neighborhood public schools have languished among the lowest funded in the nation, yet it seems every year lawmakers find ways to funnel more taxpayer money to unaccountable private schools. As public schools are starved of resources, they lose support, and the ability to provide great public schools for every student regardless of ZIP code is threatened.

Vouchers do not create choice for parents, but rather choice for private schools — they can reject students based on economic status, academic achievement, disabilities, English proficiency, immigration status, sexual orientation, or even gender. Vouchers create a dual system in which the taxpayer supports one public and accountable system and another private and unaccountable one.

Most Florida students attend public schools, yet this year’s school budget is more than $1,000 less per student versus 2007-2008 when adjusted for inflation.1

Urge your State senator to oppose SPB 7070, an expansion of private school vouchers.

State lawmakers have repeatedly shirked their constitutional obligation to adequately fund a ‘high quality system of free public schools’. With this latest voucher scheme, it has never been more important to show support for public education in Florida.

Thanks for adding your voice to the chorus of support for our public schools.