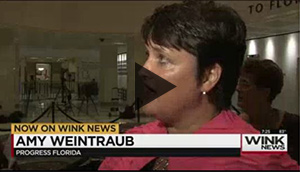 A woman has the fundamental right to accurate medical information, but that is now at serious risk thanks to a law signed by Gov. Rick Scott that went into effect on July 1. This law legitimizes a statewide network of fake women’s health centers whose primary mission is to keep women from accessing abortion care. This awful new law permanently funds them to the tune of $4 million in taxpayer dollars each year.

Florida’s fake clinics are generally not licensed medical providers even though they try to appear like it, and they have a long history of deceiving women and endangering their health. Now, we’re fighting back to raise awareness and end taxpayer funding for these anti-abortion fake clinics.

We’re already pushing back hard. On July 31st, as Progress Florida’s Reproductive Rights Program Director, I was joined by partners from the Floridians for Reproductive Freedom coalition to deliver petitions from more than 5,500 Floridians to the Gov. Scott and the head of the Florida Department of Health (DOH). Our petition delivery resulted in state-wide media coverage, increasing the public’s understanding of these onerous entities, of which there are nearly 200 across our state. We’ve got more actions on this issue in the works but we need your help to make them a reality.

Contribute to our ongoing campaign to regulate fake women’s health care clinics and get tax dollars out of the business of lying to women and endangering their health.

Until this law is reversed by a future legislature, I hope you will support our work to keep the pressure on state leaders to aggressively regulate fake clinics’ utilization of the millions of dollars DOH funnels to them.

The “Fake Clinics” bill is the latest in an onslaught of state laws aimed at blocking our constitutional right to seek an abortion. Just since Gov. Scott took office in 2011, we have seen more than 20 bills filed in the Legislature to impose restrictions on access to abortion.

Fake clinics use deceptive, manipulative practices to shame women out of getting birth control and abortion care, diverting women from accessing comprehensive and timely care from appropriately trained and licensed medical providers. Thanks for joining me in defending women’s health by fighting back against deceptive anti-abortion, fake women’s health centers.