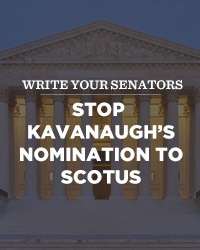 The right to abortion has been the law of the land for more than 45 years. But President Trump has repeatedly bragged that he will only appoint judges who will overturn Roe v. Wade – and now he’s found his man in right-wing extremist Brett Kavanaugh.

Any nominee to the Supreme Court should make clear that they agree the Constitution protects our individual liberty, including the liberty to make personal decisions about our bodies.

Send a message to Sens. Rubio and Nelson to protect our reproductive rights and our health by rejecting the nomination of Brett Kavanaugh to a lifetime seat on the Supreme Court.

Trump’s nomination of Kavanaugh leaves no doubt that the right to access abortion is on the line. Kavanaugh was on Trump’s short list of nominees that was vetted by extreme anti-abortion conservative groups including the Federalist Society and the Heritage Foundation. The stated goal of these organizations is to reverse Roe v. Wade.

Kavanaugh’s decisions as a federal appeals court judge nearly sabotaged the Affordable Care Act and our access to health care is in serious jeopardy if he is confirmed. Having sided with large companies over the interests of consumers time and time again, he believes the Consumer Financial Protection Bureau is unconstitutional. And Kavanaugh’s writings clearly demonstrate that he would allow Donald Trump’s abuses of power to go unchecked.

We cannot stand by silently while President Trump installs a justice who would rewrite the Constitution and roll back a century of progress on civil and human rights. This is not a hypothetical threat; it is real.

Urge Sens. Rubio and Nelson to protect our reproductive rights and access to health care by rejecting the nomination of Trump rubber stamp Brett Kavanaugh.

Whether you care about reproductive rights, access to health care, voting rights, protecting our environment, LGBT equality, or criminal justice reform, the fate of them all hang in the balance.

Thanks for fighting alongside us to save Roe v. Wade and protect our rights.