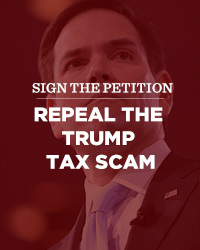 In trying to sell their tax scam, Donald Trump and Congressional Republicans have relied on a simple talking point: Corporate tax breaks will result in much higher wages and more jobs for U.S. workers, despite the fact this strategy has failed many, many times.

Sure enough, as a recent report by Americans for Tax Fairness shows1, most big corporations would rather enrich CEOs and their already-bloated profit margins than invest in working people. Surprisingly, Sen. Marco Rubio admitted this reality publicly:

“There is still a lot of thinking on the right that if big corporations are happy, they’re going to take the money they’re saving and reinvest it in American workers. In fact they bought back shares, a few gave out bonuses; there’s no evidence whatsoever that the money’s been massively poured back into the American worker.” -Sen. Rubio, April 26, 20182

If we are going to repeal the nearly $2 trillion in tax handouts that goes mostly to wealthy, multinational corporations, we'll likely need a bipartisan group of senators to get it done.

Sign the petition to Senator Marco Rubio calling on him to start working with Democrats to repeal the Trump-GOP tax scam for wealthy corporations and work on tax reform that would actually benefit working families.

Donald Trump promised that workers would get a $4,000 pay hike if Congress passed his tax scam. So, far just 4% of businesses have promised their workers any pay hike, and it’s usually just a modest one-time bonus. Businesses have promised workers about $7 billion so far, but are giving their wealthy CEOs and shareholders $385 billion―58 times as much―through stock buybacks, according to Americans for Tax Fairness research.

Marco Rubio surprisingly recognized reality―powerful corporations are getting massive tax cuts and reaping most of the benefits from the Trump-GOP tax scam, while hardworking American families are left in the dust―and our Social Security, Medicare, Medicaid and education programs are threatened with deep cuts by Republicans.

Sign the petition today calling on Senator Marco Rubio to reach across the aisle to work with Democrats to enact real tax reform that invests in working families, not corporate CEOs’ bank accounts.

Thank you for all that you do to hold our elected officials accountable and demand an economy and a tax system that works for everyone, not just the powerful and politically connected.

2"Rubio: 'No evidence' that corporate tax cut is overwhelmingly benefiting workers." The Hill, 4/30/18.