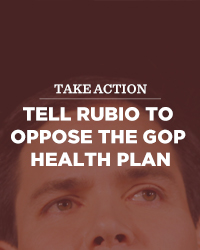 The Republican health care plan is dangerously close to becoming law. Whether you’ve contacted Sen. Rubio or not about this terrible proposal, now is the time.

Last month, Republicans in the House of Representatives passed their version of a health care plan. It’s a disastrous bill that would cause 23 million Americans to lose their insurance; lead to a sharp rise in premiums for many Americans with preexisting conditions; gut Medicaid for children, the elderly, and the poor; and endanger Medicare for seniors.

The plan is extremely unpopular throughout the country. In response, Senate Republicans have put together a small group of senators who have been developing their version of a health care bill completely in secret. That’s right: no committee meetings, no hearings, no amendments, no access to the press. However, you can be sure the insurance industry, big pharma, and their lobbyists know exactly what’s going on behind closed doors.

The health care plan being assembled in the Senate is undoubtedly a travesty. What’s more - it’s an affront to representative democracy.

Write Sen. Rubio and tell him to vote against the Republican health care plan.

The repeal of the Affordable Care Act with such a reprehensible “replacement” will endanger health care for millions of Floridians. We can’t afford to let up any pressure on Sen. Rubio. Thanks for all you do.