“This announcement by the president will be like a big present for the oil companies.”
-Sen. Bill Nelson 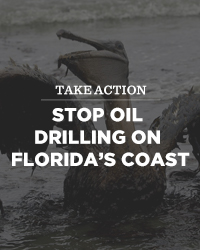 Last week, President Trump signed an executive order kicking off a process that could lead to the drilling up and down Florida’s world famous coast. Drilling poses a tremendous risk to our state’s fragile coastal environment and our tourism-based economy.

Sign the petition to Interior Secretary Ryan Zinke today and say you oppose oil drilling in the South Atlantic Planning Region, which includes large swaths of Florida. We’ll submit these petitions to the Interior Department during their official public comment period on this issue.

Offshore drilling is the slowest, dirtiest and most expensive way to generate energy. Opening our coasts to destructive drilling would do little to make us energy independent, but it would threaten our beaches with pollution and oil spills and could destroy our multi-billion dollar tourism and fishing industries.

You wouldn't know this by listening to Big Oil or their mouthpieces in the Trump Administration or in Congress, but spills happen. According to the federal Mineral Management Service, hurricanes Katrina and Rita destroyed 113 oil platforms, damaged 457 pipelines, caused 124 spills totaling 741,000 gallons of oil including six spills of 1,000 barrels or greater. And that’s all before BP’s Deepwater Horizon disaster wreaked havoc on the waters, wildlife, and local communities throughout Florida’s Gulf region.

Add your name to the petition to Interior Secretary Zinke today and show your opposition to oil drilling on Florida’s coasts.

There's a much better way. Energy efficiency and clean, renewable energy like solar power will save consumers and businesses money today and protect our coastal waters, beaches, and economies for tomorrow.

With your help, we’ll stop this latest attempt to drill Florida’s coast and continue to push our state towards a clean, sustainable, new energy future.