Rubio isn't standing up, but you can 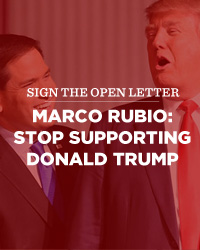 It’s simply astounding that despite all of the terrible things Donald Trump has said throughout the presidential campaign - and particularly his recently revealed comments about women - that Sen. Marco Rubio has refused to renounce his support for Trump.

Sign our open letter to Sen. Rubio: tell him to denounce Trump.

How deplorable, crazy, and ridiculous does Trump have to get before Sen. Rubio finally steps up and repudiates him?

Sen. Rubio needs to show Floridians - the constituents he’s sworn to represent - is he a leader worthy of representing our state in the U.S. Senate? Or, is he just another party hack putting his own political ambitions ahead of what’s best for our families and our future?