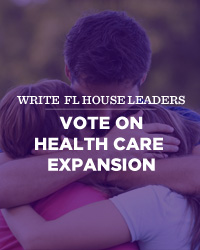 Sign our petition to Republican House Leadership and Gov. Scott today and tell them we want a vote on health care expansion. For every 1,000 people who sign, we’ll deliver directly to House Speaker Crisafulli’s office.

It doesn’t take much to understand the need for health care expansion. Florida has one of the highest rates of uninsured in the nation, and is the number one participant in the federal health care exchange. Still, there are nearly a million Floridians who fall into what’s called “the coverage gap.” Their incomes are too low to qualify for health insurance subsidies and too high to qualify for traditional Medicaid coverage.

People like Arie Strobel, a self-employed Floridian and single mom who falls into this coverage gap, are one reason of many it’s long past time for expansion. She can’t afford health insurance or the full price of Florida KidCare, so Arie is hoping for the best for her and her daughter. Like any mom, Arie thinks mostly about the well-being of her child: “I have no way to handle any kind of catastrophic health concern for her, or you know, an accident, or going roller skating or bicycling. If she were to hurt herself, it’s the kind of stuff that wakes me up in the middle of the night.”

Send a message to the Florida House Republican Leadership and Gov. Scott to stop denying health care to everyday Floridians like Arie Strobel and her daughter. They’ve waited long enough.

Billions of Florida taxpayer dollars sit in Washington that could be used right now to make sure hardworking Floridians get the health coverage they need. It’s irresponsible and downright immoral for Florida House Republicans to cling to their extreme ideology while there’s such tremendous need throughout our state.

PS: If the legislature fails to expand health care this session, it could mean a huge $1 billion loss in Low Income Pool (LIP) funding to Florida. This would wreck the state budget and put our safety net hospitals in serious danger. It’s time for the Florida House to vote.