Awake The State on January 9th 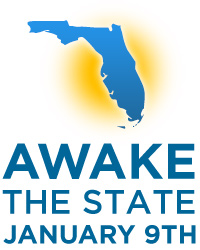 Today, Florida’s economy works for the wealthy and powerful, not for the people.

After nearly eight years in power, Gov. Rick Scott and legislative leadership’s economic policies have failed to deliver for everyday Floridians. Instead of making smart investments in our communities that will create jobs and increase pay, Gov. Scott and the legislature have been irresponsibly squandering our tax dollars and undermining our economic potential as a result.

It’s time to stand up and fight back for a Florida that works for all Floridians. It’s time to Awake The State.

Sign up to attend your local Awake The State event and fight back on the first day of Florida’s legislative session, Tuesday, January 9th.

The massive tax breaks doled out to corporations for the last eight years have cost our state billions in lost revenue, are unjust, and further rig the game for big-money special interests. Meanwhile, critical needs in our economy, education, health care, the environment, and infrastructure remain urgent…and unmet. Here’s what Florida looks like after eight years of what is known as “Rick’s Recession”, and why we need to Awake The State to move our state in a different direction:

And this is just a short list. Join us in your community as we kick off Florida’s 2018 legislative session and advocate for a state budget and an economy that works for every Floridian, not just the wealthy and well-connected.

Find your local Awake The State event on January 9th and sign up to join us!

Everyday Floridians are fed up with our rigged economy and politicians balancing the budget on the backs of hardworking Floridians. Let’s Awake The State on the first day of Florida’s legislative session and show our representatives in Tallahassee what a Florida “for the people” really looks like.