ST. PETERSBURG – This week, Donald Trump will become the Republican presidential nominee in Cleveland. Thousands of miles away, Marco Rubio will be touring the state of Florida and trying as much as possible to make voters think he is not the same anti-Hispanic, anti-women loose cannon as his party’s nominee. And yet, trying to have his cake and eat it too, he will address party activists at the convention via a video. Try as he might, Marco Rubio can’t escape the fact that he is sharing the same ballot, the same party platform and the same agenda for America as Donald Trump.

Today, Progress Florida teamed with For Our Future to launch digital ads that tie Rubio to just a few of Trump’s more outrageous statements thanks to his continued commitment to support the Republican nominee for president.

“Supporting the Republican nominee for president means supporting Donald Trump, period,” said Mark Ferrulo, Executive Director of Progress Florida. “That means you want in the Oval Office a man who will push building a wall with Mexico, banning Muslims and an economic plan the non-partisan Tax Policy Center said would increase the national debt by nearly 80 percent.”

The ads will direct visitors to www.WrongWayRubio.com. 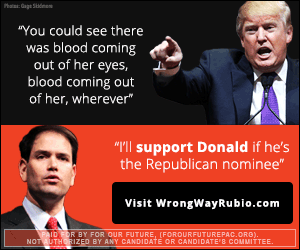 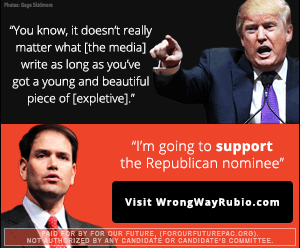 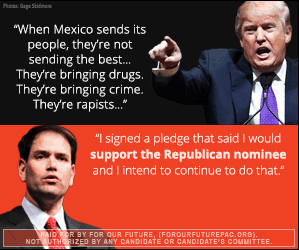