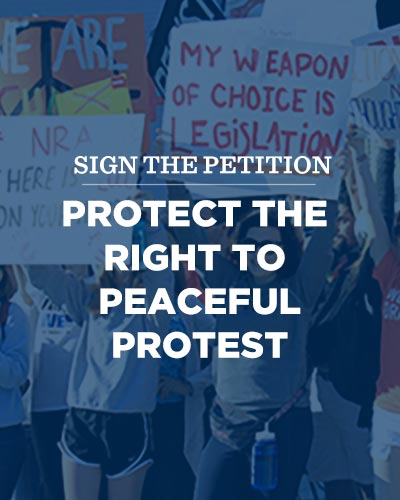 Gov. DeSantis has failed so thoroughly at his most basic task of protecting Floridians — both from the coronavirus and the economic damage it has caused — that he is desperate to distract voters. His top legislative priority going into the 2021 legislative session isn’t a jobs bill, it isn’t to improve our schools, or combat COVID, but to push legislation that would criminalize peaceful protests -- House Bill 1 (it’s “1” for a reason.)

You might think DeSantis rolled out this priority bill after right-wing militants and white supremacists violently stormed the U.S. Capitol and brazenly attacked our democracy. Nope, DeSantis announced this un-American, dissent stifling legislation after Black Lives Matter demonstrations last year, and he’s now using the horrific attack on the U.S. Capitol as a smokescreen to silence, criminalize and penalize peaceful activists.

Sign our petition urging the state’s legislative leaders to oppose HB 1, the legislation that would criminalize peaceful protests.

The proposed new law allows for felony charges against protestors exercising their constitutional rights. If enacted, this bill would limit the ability of local governments to increase funding for programs that prevent crime, and would keep protestors in jail without bond if they’re arrested during a demonstration.

The right to peacefully assemble and protest is protected by the First Amendment and has been a profoundly important way to effect positive change throughout the history of our country. Generation after generation, peaceful protest has achieved important social change, from ending child labor and school segregation to winning civil rights, a cleaner environment, and expanding access to the ballot box.

Every Floridian wants and deserves a safe community. But much like with their failed COVID response, Gov. DeSantis and his Republican allies are willing to disregard our safety to score cheap political points by claiming to make us safer when they’re doing nothing of the kind.

Sign our petition urging the state’s legislative leaders to oppose the legislation that would criminalize peaceful protests, HB 1 and SB 484.

More than 23,000 Floridians have died from COVID in the last year. If Gov. DeSantis wants to protect our communities and keep Floridians safe, he should focus on protecting Floridians from the heartbreaking, devastating health and economic impacts of COVID. He needs to do his job and let law enforcement do theirs.

Thank you for standing up in support of peaceful protest in our state.